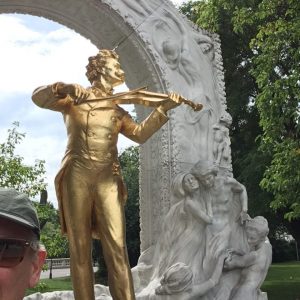 All it took was a wiener schnitzel, some yoga and a bike ride to get into Vienna. It was never part of my wish list to visit this city – it just happened to be my departure point from Europe on my air ticket so I thought, why not. Arriving at night after 12 hours of travelling I had to summon the energy to figure out yet another public transport system, my fifth now not counting London and Paris that I have a basic knowledge of, but Vienna was a challenge.

I have had little exposure to the German language let alone Austrian apart from a few words watching Hogan’s Heroes on TV in my childhood, ‘Raus!, Raus!, Es ist verbotten!’ and my neighbour Kirsten who says ‘Guten morgen’. Even finding my way out of the metro took a few moments, Engang. It doesn’t help newbies like me to figure out Wein also means Vienna – ok, got it.
But the first words I needed to get my head around were, the Schottenring where I need to change metro lines, take the Karlsplatz direction to the Ruthaus where I needed to Engang, and Josefstadfer Strase and Lange Gasse were the streets leading to my hotel.

The Lehrerhaus Pension is a budget hotel in the smelly old carpet style and there’s no atmosphere and nobody looks like they want to be here, especially the receptionist. They give you a bunch of keys, one for the front door, one for the internal door on your floor, one for the door to your room and one for a safety deposit box in your room. 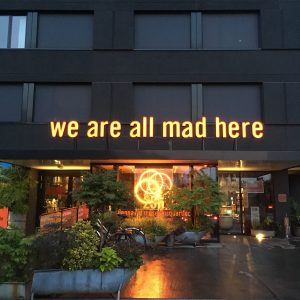 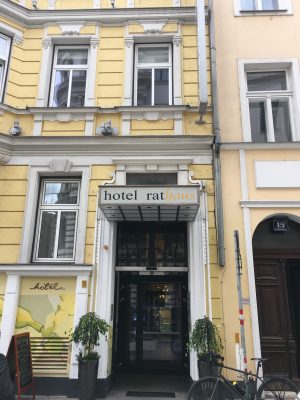 Nearby is a hotel called The Rathaus, – glad I didn’t check in there.
I have been using Booking.com and I would discourage people from it. They charge a premium on top of the usual rates (go to the hotel’s own website), and they boast far too much about the properties virtues. Walking around the streets I have seen much better, modern, open, fresh hotels with busy reception areas, bike hire, a restaurant and a lively feeling of travel and travellers. At the Lehrerhaus I fully expect to open a cupboard and find an entrance to an secret annexe with a family still hiding from the Nazis. I have come to the opinion I would rather stay in a dorm in a modern hostel than an old budget hotel.

The first job was to find a laundromat to wash and overdue bag of clothes. The receptionist sent me off in the wrong direction, when I eventually found it two hours later there was no attendant only a coin interface with all the instructions in German, of course. Having loaded up and paid my money the door wouldn’t latch shut properly and water was sloshing out. I couldn’t change machines without going off to get more coins, and it was Sunday and everything was shut. So I wedged a couple of empty plastic bottles in to hold the door shut. When I returned, the entire floor of the laundromat was covered in water and my clothes sat in a pool of water in the machine.

I was getting a bit travel-weary I think, just too much stimulation from too many wonderful new places – just too much stuff to process and figure out, and no one to bounce ideas off. I’m generally self-sufficient and have done really well so far, but Vienna was one learning curve too many. That evening I found a restaurant called Cafe Hummel in my neighbourhood and had a magnificent wiener schnitzel for 22Euro, although, later I learned they could be had at numerous other places for 9Euro, but never mind.

The next morning I did some yoga which always puts me in a better frame of mind and hired a bike and went cycling through the Prater. This is an enormous park the Habsburg family used as their private hunting grounds and much of it still looks like a forest. I did a Facetime call to Luca and Julia while cycling along and it was good to chat with the family. I had planned on a circuit that took in the Danube and the strip of land that runs down the middle. Suddenly, it poured-down with rain and I just manged to get a cafe overlooking a water-skiing set up on the river using a high-wire circular cabling system – looked like fun.

There are good cycle paths in Vienna and other cyclists I met were so helpful. I needed to rely on a paper map because the Facetime calls had depleted my phone battery but I prefer paper maps anyway. 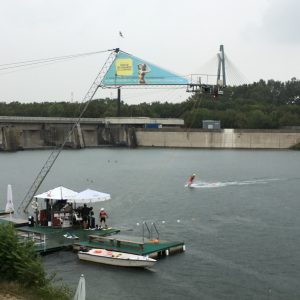 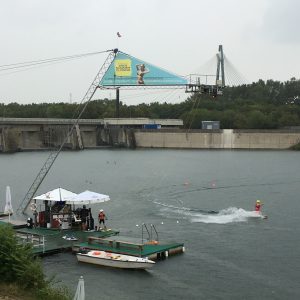 The circuit took me back up the Danube Canal which runs back into the central city. A local cyclist explained to me the ring-road system in Vienna and cheerfully called out, ‘Enjoy Vienna’ as he cycled off.

It down poured with rain again and I kept going because I had to get the hire bike back. I got soaking wet but the air was warm it didn’t matter and I wasn’t cold. I returned to the hotel, changed into my best clothes and went to the Musikverein Goldener Saal to attend the Mozart concert that I’m so glad I booked a few weeks in advance. It was a full-house and magical. I was so glad to be in Vienna. The concert ended with Thus Spoke Zarathustra by Richard Strauss as an encore and not on the program but I recognised the famous waltz from the opening of the Stanley Kubrick film, 2001 Space Odyssey. 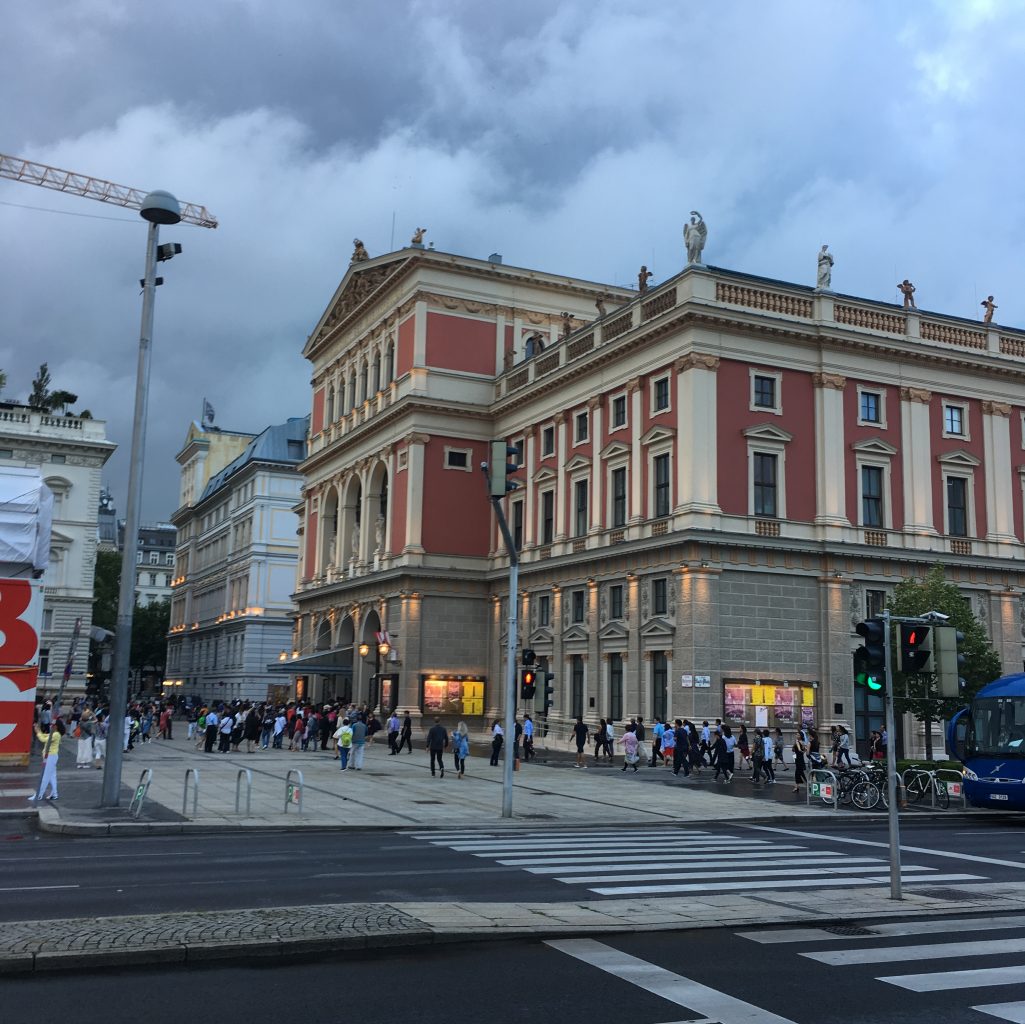 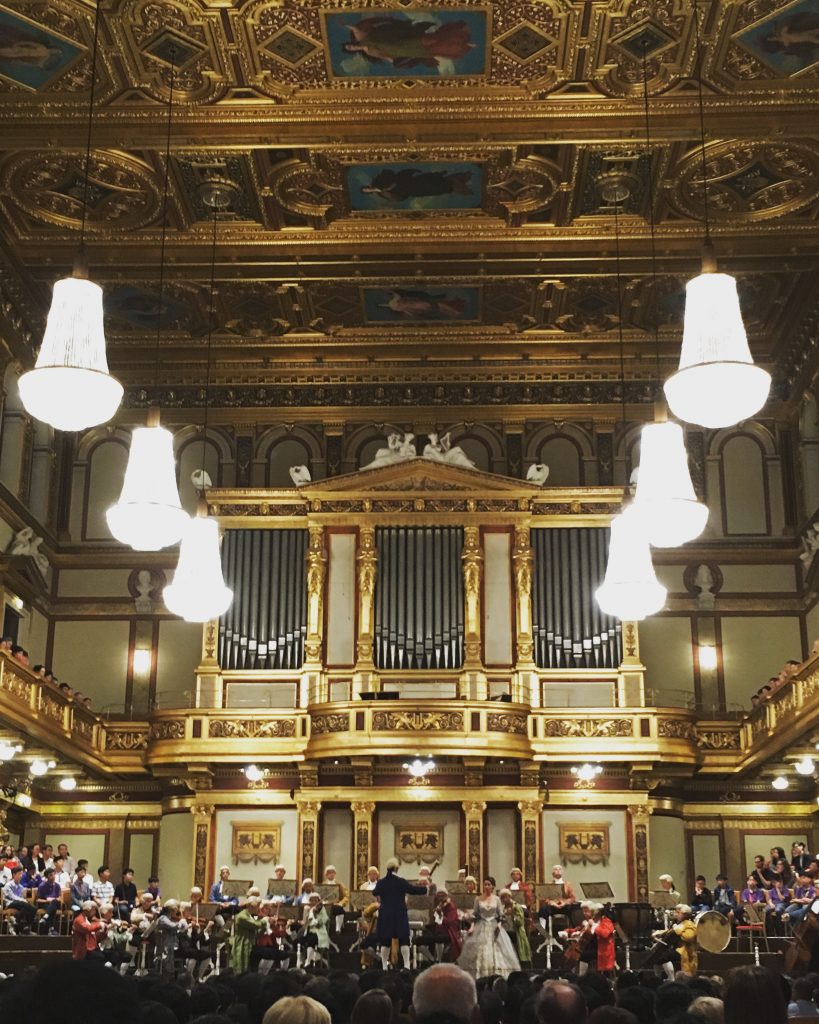 It’s amazing how a good meal, some exercise and some live music can change your whole outlook on life.