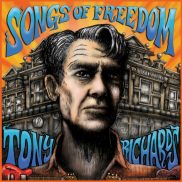 The Kingslander is generally known as a sports bar and even though the management ‘tries music’ occasionally, priority will always be given to any significant sports event. But lately, they have taken a serious approach to the Thursday Open Mic night with the inclusion 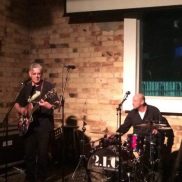 of a massive PA system, a row of monitors and a two-person team, one to co-ordinate performers and the other to tech the sound. They still keep all the screens around the room live with Sky Sport on various channels, on mute, so the patrons can keep an eye on the latest Thursday night sporting events which happened to be Woman’s Boxing, Motorsport and Australian League.
There’s a very nice full drum kit on stage but Al was told, when taking to the stage, not to play too loud, as a result he played too soft and I could barely hear him. I played two songs using the looper which I realise now is not a good match with a live drummer because loops never loop perfectly and the groove can get a bit jumbled – but we rocked on. After two songs, Ramp It Up and Glow, Lydia, the host, asked us to wrap it up. I said we’d only played two songs and the slot is for three, admittedly both extended versions, and I insisted on finishing with a slow one, Centre Of The Groove, which I shortened down to a two minutes. It felt good to end on a more harmonic note but I came off stage feeling a bit rattled. I think the tech had put a heavy compressor on my guitar because it ducked in and out of volume. Al said, ‘I wish the sound on stage was like the practise room’. It’s true, it always sounds weird on stage and over the years I have never got totally used to it – I just rock on.

Allan and I opened the evening at the Portland Public House last night and the place was humming.

I tried three different songs; a rocker called Ramp It Up  . . ‘she looks so good playin’ guitarrr’, and then a funk groove, Glow  . . ‘how da riddem makes u wana burn down slow’, and country style slow number, Waiting For The Stars To Align . . ‘no-one reads the manual, you figure it out yourself’. I looped a central section of each song and was glad Jono managed to get some bass out of the system working that sub at the Porty – oomph, oomph. It was so much better with Allan playing along on the bongos.

Last night I played at Grand Central on Ponsonby Road and had a good night probably because my guitar was up nice and loud.

There’s no stage monitor but one of the front of house speakers is behind you to one side so it sort of works as a monitor. I practised with my looping pedal, a Boss RC30, earlier in the day and worked on two
funk numbers: basically two chord grooves with a turnaround whenever I feel the groove is running out of steam. It was a good night with all the regulars turning up; Nick the knowledgable finger-style player with his beautiful collectors’ Martin, Warren, Jono, Graeme and his group, and Eddie Gaiger who runs it so well. Ed never introduces anyone or thanks anyone, he leaves the performer to create their own space on stage, that’s the way it should be, a performer needs to ‘own’ the stage and create their moment themselves – I like that. Stage craft is a real thing and I’m still hopeless at it but I try. I think a short greeting is enough and then maybe a bit of chat after the first song about the next song. The funk numbers I played were my own, Glow and Floating In the Air. Each one lasted about 8 minutes. I let the looper go on endless overdud and created a blurring mass of sound, punched it off and sang the last verse clean. I thought two numbers was enough but Ed suggested one more and I de-tuned the B string down to A and played Hold Down Love – finally singing it the way I had been meaning to for ages, hitting that first note up an octave to give it a stronger opening – it worked, I think.
This week I’m playing The Portland at 8pm, The Clare on Wednesday and the Kingsland and 121 Ponsonby Road on Thursday, and intend to play a different set for each venue.